The photos below of Muir Glacier (in the foreground of the first picture) and Riggs Glacier (the tributary glacier in the upper right) were taken in August 1941 and August 2004 from the same spot on White Thunder Ridge in Alaska’s Glacier Bay National Park. (Click on photos to enlarge.) 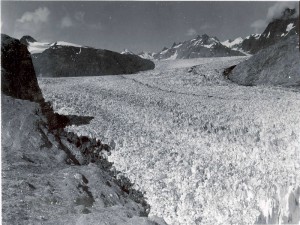 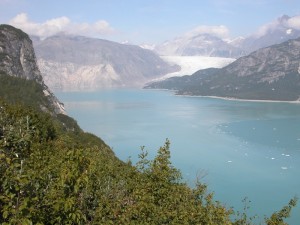 When the first picture was taken, the ice in the center of the photo was over .7 kilometers (.43 miles) thick. By the time of the second picture, Muir Glacier had retreated over 7 kilometers (4.4 miles), out of view. (Photos and facts are from the U.S. Geological Survey’s Repeat Photography of Alaskan Glaciers.)
By YouSA Staff | May 20, 2014 | Various Items Related to the Future of Humanity |